The history of breaststroke

Breaststroke is one of the oldest swimming styles. However, breaststroke was not thought of as an athletic activity for a long time. For the pragmatic homo sapiens, breaststroke has long been simply the easiest way to not drown.

Breaststroke was already popular in the Stone Age

The first depictions of breaststroke can be found as cave paintings in southwestern Egypt:

The “Cave of the Swimmers” was discovered in 1933 on the Gilf-el-Kebir Plateau and contains numerous drawings of people swimming breaststroke. These paintings are believed to have been made about 10,000 to 5,500 years ago, when Africa was still experiencing a wet period with lush vegetation. Similar illustrations can also be found in Babylonian bas-reliefs and Assyrian murals. Scientists suspect that the former Stone Age man “copied” the movement of the frog’s legs when swimming.

In 1538, the German linguist Nicolas Wynman wrote a detailed treatise on swimming. His book, “Colymbetes”, did not focus on fitness or competitive swimming, but instead on the basics of swimming to prevent drowning. More than 150 years later, in 1696, the French naturalist and writer Melchisédech Thévenot published a book called “The Art of Swimming”. He first described a breaststroke technique that is very similar to today’s. Consequently, he can be regarded as one of the pioneers of modern swimming.

Across the English Channel in 21 hours and 45 minutes

Around the year 1800, the first swimming competitions in Europe gained popularity. The athletes mostly used the breaststroke technique, but individual swimmers also tried their hand at the front crawl. In 1875, Captain Matthew Webb became the first person to swim across the English Channel. For his daring experiment, he used breaststroke and took 21 hours and 45 minutes for the 34.21 km distance. At the 1904 Summer Olympics in St. Louis, breaststroke was the first discipline to be approved. In addition to breaststroke, backstroke and “freestyle” were also considered to be swimming disciplines.

The “forward movement” of the arms during breaststroke costs speed

Starting in 1928, David Armbruster conducted a study at the University of Iowa in which breaststroke swimmers were filmed underwater and their movements analyzed. He quickly realized that bringing the arms forward underwater significantly slowed down the swimmer with each stroke. In 1934, he developed a swimming technique in which the swimmer moved his arms forward over water. This type of swimming was difficult to learn, but brought a significant increase in speed.

A year later, Jack Sieg, also at the University of Iowa, developed a new swimming style: The swimmer is sideways in the water and kicks with the legs closed, similar to a fish with its fin. A short time later, Jack Sieg adapted his swimming technique: he turned the body onto the front and kept the closed-leg kick – the dolphin kick was born.

Later, David Armbruster and Jack Sieg combined their arm and leg techniques and called them “Butterfly”. Although this swimming style enabled new records, the closed leg-stroke violated the rules of breaststroke. The combination of butterfly arms and classic breaststoke legs was allowed.

At the 1936 Summer Olympics in Berlin, some athletes used this style of swimming, and in 1938, almost every competitor swam in this way. Until 1952, swimming butterfly arms with breaststroke legs was considered its own style and had individual rules. 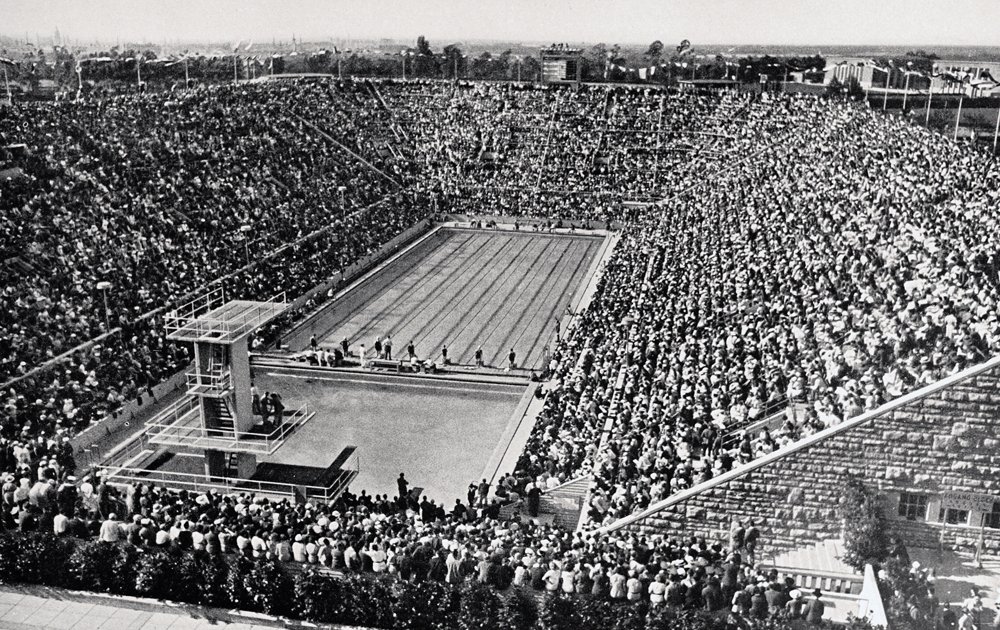 Breaking through the surface of the water increases water resistance

Six candidates were disqualified from the 1956 Summer Olympics in Sydney for swimming almost the entire distance underwater. Breaking through the water surface increases water resistance enormously; by swimming entirely under water, these swimmers had a massive advantage. The Japanese Masari Furukawa bypassed the rules by being only five meters above water for the first three track lanes, and completed the last track half underwater. He won the gold medal.

After several imitators became unconscious in the water, FINA reacted and changed the rules: Now every swimmer had to break through the water surface with his head after the start and after every turn.

Numerous FINA rule changes for breaststroke from the 1960s onwards

In the 1960s, FINA made further rule changes: arm movements were only allowed to be performed above the hip, except for the first stroke after the start and after each turn. Until 1987, the head had to remain continuously above water, later, other body parts could also protrude from the water. This led to a breaststroke variant in which the swimmer brings the arms together under the body as usual, then leads the arms under the chin in order to catapult them suddenly over water until the arms are completely straight.

Another controversy took place at the Summer Olympics in Athens after Japan’s Kosuke Kitajima defeated then world record holder Brendan Hansen in the 100m breaststroke. Video footage after the competition showed that Kitajima was performing closed-leg kicks several times after the start and after the turns. Since the officials did not notice these dolphin kicks during the race, the final result was not revised.

In September 2005, however, FINA changed the rules again, allowing one dolphin kick after the start and one after each turn.

In our basic courses, we teach our students how to swim breaststroke efficiently and technically accurate. The suitable swimming equipment can be obtained all year round in our swimming sports specialist shop.

You know the basics, but want the absolute perfection to get the decisive tenths out? Then contact us!