The competitive swimsuit and its evolution

The swimsuit is still very popular. It’s not just competitive swimmers who swear by the high-tech fabric. Even ambitious hobby swimmers recognize the many advantages that a suitable swimsuit can offer.

The beginnings of the swimsuit – Speedo S2000® and Fastskin® dominate

As early as the 1990s, the first competition swimsuits were launched by the leading manufacturers of swimming equipment.

The Speedo S2000®, which debuted in 1992, promised a 15% reduction in water resistance compared to conventional swimwear. The resulting improvement in performance was primarily made possible by technological advances in the processing of nylon fabrics. The smooth, tight-fitting material of the Speedo S2000® helped swimmers to improve their performance in the water. As a result, 53% of the swimming medals at the Olympic Games in Barcelona were won by wearers of the Speedo S2000® that same year.

Speedo made another quantum leap in competitive swimwear technology with the FASTSKIN®swimsuit, approved by FINA in 1999. This full-body competitive swimsuit mimicked nature in its surface construction. They realized that, compared to a smooth surface, the microscopic scales in a shark’s skin massively reduces drag in the water. As a result, Speedo incorporated tiny grooves and elevations, similar to those in the shark’s skin, in the surface of the FASTSKIN®. Speedo also coated the lycra fabric of the swimsuit with Teflon. Due to the tight fit and the FASTSKIN® supporting the swimmer’s muscles in the right places, the wearer’s body became more streamlined. This put the swimmer in a hydrodynamic position.

Speedo FASTSKIN® competition swimwear took the world by storm at the 2000 Sydney Olympics: 83% of the swimming medals were won with this swimsuit and 13 out of 15 world records were set by athletes wearing Speedo’s artificial skin.

After these successes, a race for technological supremacy in competitive swimwear began. Arena launched Powerskin® swimwear in 2000 and Powerskin X-Treme® in 2004. Adidas countered in 2003 with the JETCONCEPT®suit, which used technical knowledge from aviation and was rigorously tested in the wind tunnel. But further improvement of the surface of the swimsuit brought little progress. Therefore, the main focus of the manufacturers was to optimize the position of the body in the water.

Speedo responded in 2008 with theLZR Racer (LZR) suit, which, in collaboration with NASA, was tested extensively in both the wind tunnel and in the swimming channel. The LZR Racer had built-in panels that forced the body into a certain position, similar to a corset. The aim was to keep the swimmer high in the water to reduce turbulence and water resistance. In addition, the LZR Racer improved the oxygen supply to the muscles and had a water-repellent coating.

However, the LZR Racer was not a swimsuit for everyday use: it took about 15-20 minutes to put on. And after 5-10 uses, it had lost so much tension, that the suit was no longer competitive.

It was, however, not unsucessful: at the 2008 Olympic Games in Bejing, 94% of the races were won by athletes wearing an LZR Racer suit made by Speedo. 98% of the medals at these Olympic Games were awarded to the high-tech textile, and 23 of 25 new world records were set with the help of the Speedo LZR.

Shortly after the Olympic Games, the first lawsuits against Speedo were filed by competing manufacturers. Arena, for example, called the Speedo LZR “technology doping.” Nevertheless, the hunt for gold medals and profitable sponsorship contracts led to a technological “arms race” with massive advertising campaigns. Within a very short time, manufacturers such as Arena, TYR, Nike, Mizuno, Asics, Adidas, and Descente caught up. Already in 2009, the supremacy of Speedo was a thing of the past.

After the Speedo LZR Racer had broken more than 130 world records in less than a year, there was extensive debate. It was feared that technological advances could become too influential in swimming, so FINA was forced to react. There were major rule changes regarding the length, thickness, surface area and material composition of the competitive swimwear.

Thin racing swimsuits are suitable for competitions in the pool

There are in essence two different types of swimsuits on the market today: thin racing suits for training and competition in swimming pools, and neoprene suits for open water.

A competitive suit, such as the Arena Powerskin Carbon Ultra, supports the most-used muscles and helps the swimmer maintain a streamlined position. It improves efficiency by isolating the movements of the upper and lower body and reduces resistance in the water using ultrasonic welded seams.

For the top-fit swimmer who is unable to improve his training times despite also having perfected his swimming technique, a racing suit can be the way to break through the performance plateau. The psychological effect of simply wearing a high-tech textile already helps many swimmers to improve their swimming performance. 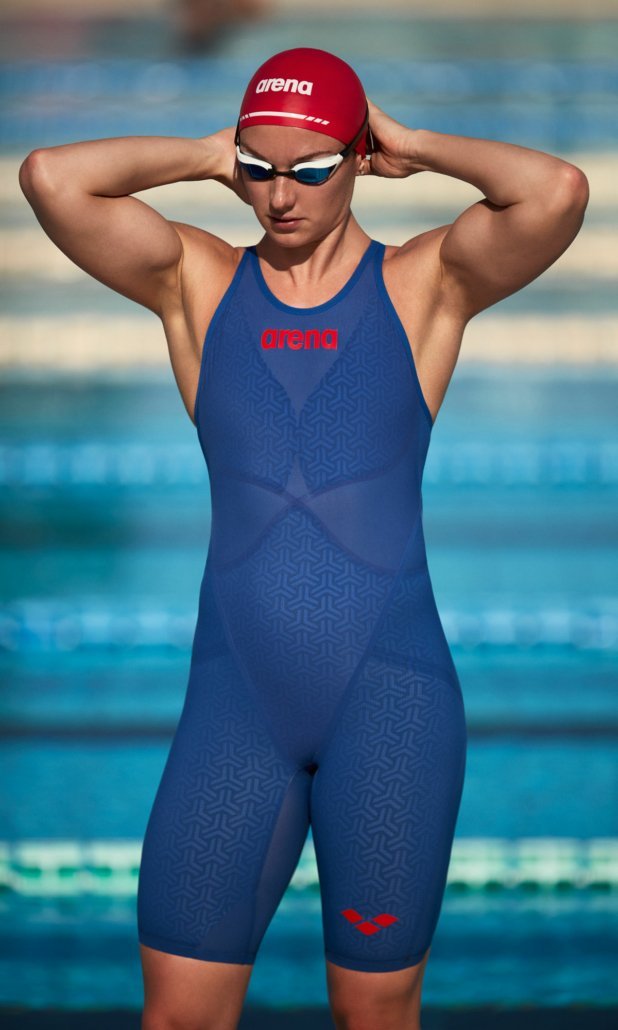 Neoprene swimsuits are suitable for open water use

Wetsuits, on the other hand, are intended for open water swimming, which is currently very popular. A widespread misconception is that a wetsuit prevents you from getting wet. However, this is not the case, because water can penetrate the arms and legs of the suit. However, as with a diving suit, the circulation of water on the body is prevented. Within a short time, the water caught on the body heats up and forms a protective layer of insulation under the neoprene skin.

Manufacturers also attach great importance to the best possible freedom of movement, low drag and increased buoyancy. Triathlon wetsuits also feature multiple zippers to make the transition from water to land as quickly as possible. Some sophisticated suits such as the Arena SAMS Carbon Wetsuit are even decorated with special patterns that have been shown to reduce the risk of a shark attack.

We have not only racing swimsuits and triatholon wetsuits from many different brands in stock, but also other competetive swimming equipment such as goggles as well. With regard to wetsuits, we offer special neoprene swimsuits for children in our children’s swimming courses as well.

Visit us personally in our specialist swimming shopSchwimmsport Steinerin Vienna or come to one of our neoprene test events! 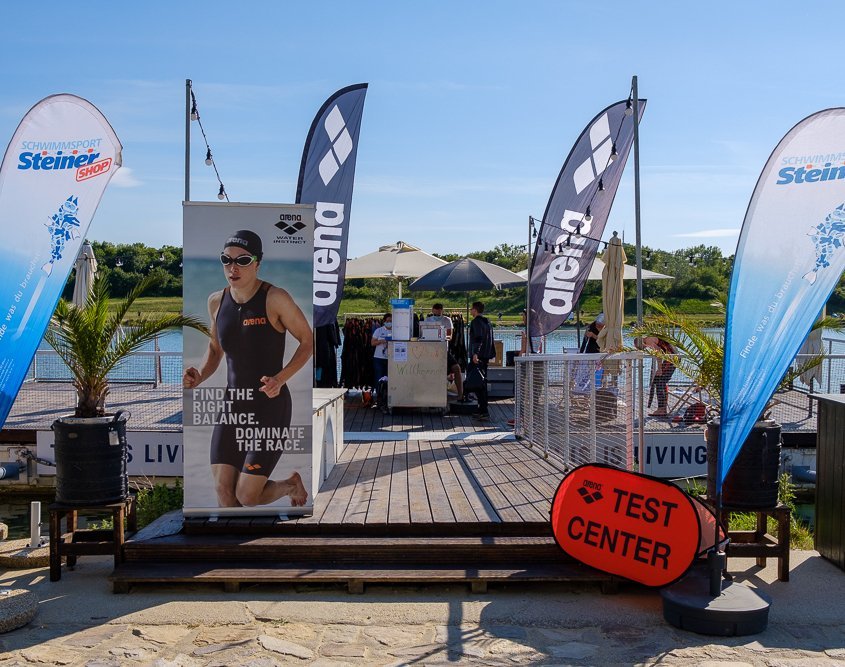 Our Christmas Party 2019
Scroll to top